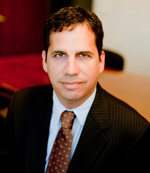 After graduating from the University of Texas at Austin, Jason M. Kroot began his legal career as a law clerk for prominent plaintiff’s trial lawyer, Herbert F. Stride of Stride, Craddock, & Stride. While earning his law degree at Chicago-Kent College of Law, Kroot participated as a member of the school’s successful National ATLA Trial Team. After graduation in 1999, Jason M. Kroot joined the medical malpractice law firm of Sussman, Selig, and Ross where he served as lead counsel or co-counsel on countless medical malpractice, personal injury, and wrongful death cases.

In 2001, Jason M. Kroot and his co-counsel obtained a $16.3 million verdict in a medical malpractice case, a record verdict of its type in the Circuit Court of Cook County. In 2003, he achieved national recognition by becoming one of the youngest members ever chosen in Who’s Who In American Law. Since then, Jason M. Kroot has continued to distinguish himself as one of the outstanding trial lawyers in the City of Chicago, which includes a 98% case success rate.

In 2006, Jason M. Kroot was invited to be an assistant coach for the Chicago-Kent National ATLA Trial Team. That same year, he was appointed Co-Chair of the Chicago Bar Association YLS Trial Techniques Committee, where he organized and moderated seminars every year on trial techniques for lawyers throughout the Chicagoland area. Jason M. Kroot has also served as the head of a medical malpractice department for one of the largest personal injury firms in the country.

Over the last twenty years, Jason M. Kroot has been entrusted to handle numerous high profile lawsuits in Illinois. Kroot has prosecuted including:

About Kroot Law, A Plantiff's Firm

Kroot Law, LLC, concentrates on serious medical malpractice, personal injury, and wrongful death cases primarily in Illinois. On occasion, Jason M. Kroot has also agreed to take on significant injury cases in other states. The firm is distinguished by its ability to deliver exceptional results and uncommon personal service.

Contact Us
Practice Areas
Client Reviews
★★★★★
Thorough, articulate, and extremely knowledgeable of the law. Jason is someone I would highly recommend to family and friends. He represented me in an automobile case and was very happy with the overall experience and outcome! Joni S.
★★★★★
Jason handled a very challenging auto accident case for me. My injuries were all based on preexisting conditions that were made worse by the accident. He did an amazing job proving up my case, which included destroying the defense expert at deposition. In the end, I received an excellent settlement on a tough case. Jason is a very smart, talented, and diligent lawyer who I would highly recommend to anyone. Phil S.
View More
Submit a Law Firm Client Review